Putting in the Slipper 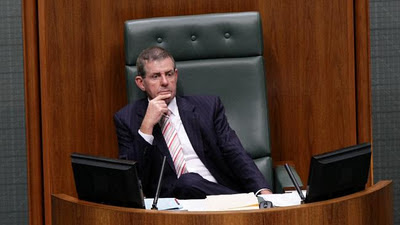 Peter Slipper is the most recent in a list of Queensland pollies who has demonstrated an eye for the main chance.
He follows in the time-honoured tradition of such notables as Vince Gair, Mal Colston and Pat Field to name a few.
The outrage of his Coalition colleagues is a bit lame (and hypocritical) when this history is considered. Such indignation obviously has a great deal to do with whether or not the coup has been engineered by someone on your side and who ultimately benefits, rather than the morality or otherwise of the activity.

Put simply, the belief seems to be that if we did it, it’s OK, but if the other side carried it off it’s mean and nasty.

It could be argued that this situation would not have eventuated if Abbott hadn’t refused to pair the Speaker and Deputy Speaker. Refusing the pair as an act of petty political spite put the ALP one vote down. It's come back to bite him on the bum.
Having said that, the fact that Peter Slipper is involved, comes as no surprise, based on what I know of him.
I first met him in 1894 as the newly-elected National Party member for Longman. There have been some boundary changes and renaming of electorates since then, but Slipper has been a constant in this part of the world.

At that time I was principal of a special school to the North of Brisbane which was on the border of four electorates, two state and two federal. Consequently, I saw a great deal of Slipper (and the other pollies, two Labor, and two National Party) at school functions such as fetes and award nights.
One of these pollies, a state Labor member and an ex-wrestler named Joe Kruger, actually made an official complaint against me to the then Regional Director because I didn’t acknowledge him from the podium at a school function.
Silly bugger phoned me the morning before and told me he couldn’t make it because he had a prior commitment. He then turned up late and didn’t let me know he was there, so I didn’t mention him. He actually mistook me for my predecessor as principal who was a Liberal supporter with political ambitions of his own.
I was young and innocent back then.
Slipper was visibly uneasy in the presence of kids with disabilities, but worked hard at making a name for himself as a supporter of the school. My bride, who has a knack with accurate assessments of character, intimated that she found him “flakey”. You’d have to ask her exactly what that means.
He’s actually High Church Anglican, which goes some of the way towards explaining his friendship with Rudd, who is of similar persuasion.
One thing that this situation reinforces is that federal pollies from south of the border completely misunderstand the way Queensland works. Abbott’s attempts to have the Queensland LNP machine go easy on Slipper obviously cut no ice at all.
Queenslanders have a knack of listening to advice from Sydney, Melbourne or Canberra (take your pick) and then doing exactly the opposite.
People from the south are called BFCs, BFSs or BFMs* here.
The collective term is “Mexicans”.
*Bastards from…….
Posted by 1735099 at 09:39