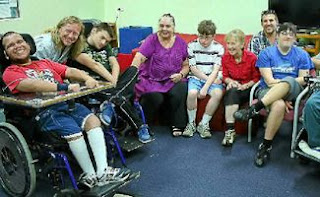 Years ago I read an article by a couple of disability workers in the USA. From memory, Katz and Katz – a husband and wife team.
Unfortunately, with the passage of time and five house moves intervening, I’ve lost the original journal.
I remember the content well.
Put simply, it points that the greatest predictor of quality of life is autonomy. Autonomy has become the preferred term describing that combination of freedom and independence that enables any individual to control their environment and activity.
Katz and Katz maintained that there is a direct negative correlation between quality of life and dependency. If you have to depend on someone else (a carer for example) to allow you to live an active life, by definition your quality of life is poor.
If I want to (for example) go to the shops and need to wait for someone else to take me, I am dependent on that other person. My quality of life depends on that other person’s generosity and availability.
Given that 5% of the Australian population is classified as having a disability, this problem of dependency affects over 1 million. With the rapidly aging demographic in this country, this proportion will only increase.
It is a significant issue, and effects more people, day to day, than other hot button issues such as the Carbon Tax, boat people and the perils of minority government.
There is a political dimension to this, relating to the push for a National Disability Insurance Scheme, which generally has bipartisan support, but when was the last time you saw it on the front pages of any newspaper or first item on the evening TV news?
It’s just not sexy. It doesn’t have heroes and villains, and there’s no oppositional behaviour around it, so the media largely leaves it alone.
There is an item today about the sad and shameful situation in our national treatment of people with a disability in comparison to other OECD countries, but I’ll bet you pounds to peanuts that it won’t become the topic of conversation on blogs or talk back radio.

An extract from the news report -

The report said 45 per cent of people in Australia with disabilities lived in or near poverty and Australia had been ranked 27th out of 27 OECD countries for relative poverty risk. Australia ranked 21st out of OECD countries for the provision of job opportunities for the disabled, with just 31 per cent of people with disabilities in employment.
It says a lot about our national political dialogue, and most of what it says is pretty disgusting.
By the way, I think I know why Price Waterhouse actually bothered with the study. One of the people driving it is a quadriplegic.
Says it all really.
Posted by 1735099 at 13:00