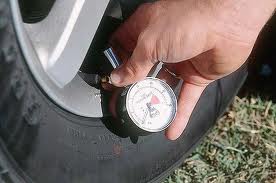 It took a while, but I figured it out in the end.

Last week I was driving a Nissan X-Trail diesel along the Warrego on my way west to work. They’re a neat little machine, and quite enjoyable to drive. The usual fleet equipment for these trips is Hyundai Santa Fe.

This particular vehicle, however was not behaving as per specification. When cruise control was engaged, it would immediately downshift to fifth gear, so the motor would move from 2000rpm to 2300rpm, resulting in more noise, and I assume, higher fuel consumption.

It was easily fixed by moving the auto selector across to manual mode, selecting top (sixth) gear without disengaging the cruise, but it was a nuisance and bothered me, because I don’t like unexplained phenomena when I’m driving.

When I refuelled in Roma, I noticed both front tyres looked a bit underinflated. This step (of looking closely at the vehicle before driving it) was something that was drummed into us at the last driver training session I did. I've been driving since 1964, but still attend these Q-Fleet sessions when they're offered, as they're usually good value.

I should have remembered what I was taught.

Both front tyres were about 10 psi lower than they should have been.

When they were pumped up to the recommended pressures, the cruse control reverted to normal behaviour.

It seems unlikely, but in the absence of any other explanation, I’d have to accept that the slight drag caused by these low pressures were the source of the problem.
Posted by 1735099 at 11:37