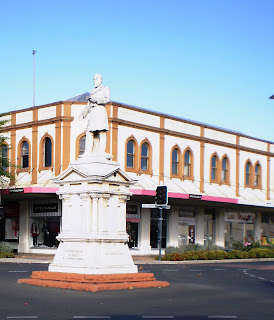 Recently, on my way to Sydney by road, I passed through Warwick.
“Passed through” is not strictly correct, as I ended up spending a fair chunk of time there. This was on account of my GPS failing.
I didn’t get lost, but the GPS stopped working just before Warwick, where I’d stopped for breakfast, and it became apparent that the cable that charged it up from the cigarette lighter had gone to the great recycling depot in the sky. I therefore had to hang around until Dick Smith opened, to snag a replacement – which I did for $2, but that’s another story.
There was no way I was driving into Sydney without a working GPS.
My Dad was born and raised in Warwick, and it is, along with Charters Towers and Ipswich, one of those places in Queensland where every second (or third) Queenslander comes from.
Warwick is the site of the notorious egg incident when a disaffected local egged Billy Hughes PM at the time (November 1917).
In those days, there was a furious tussle between the then Queensland Premier Thomas Joseph (TJ) Ryan and Billy Hughes, PM at the time, about conscription. The only way to travel interstate back then was by train, and Hughes had stopped in Warwick to give a pro-conscription speech from the railway station platform.
This went down like a lead balloon in Irish-Catholic Warwick, and a local called Brosnan threw some eggs at him.
Apparently the eggs thrown were particularly noxious and the thrower was very accurate, knocking Hughes' hat off. Hughes took great exception, and ordered the nearest member of the Queensland Police to “arrest that man”. This sergeant, who was Irish Catholic (as was the egg-thrower) is reported to have told Hughes that as a federal politician he had no jurisdiction in the matter, although the words used are lost in the mists of time.
Perhaps he spoke the 1917 equivalent of “get stuffed”.
One of the upshots was the formation of the Federal Police. The story goes that Hughes (also called the “fiery particle") got more and more worked up as he travelled south, to the point that he came up with the idea of establishing his own police force, so the next time that someone threw an egg at him, he could extract vengeance.
I first heard about this incident from a Uni lecturer called Dr Denis Murphy when I was studying the history of Queensland in the seventies at U of Q. Murphy was a charismatic figure, who unfortunately died of cancer in 1984.
Had he survived, I’m convinced he would have rivalled Peter Beattie as a Queensland politician. He certainly got me interested in Queensland history, and taught me that Queensland and Queenslanders are different, something that many federal politicians have forgotten to their cost.
One who either forgot or never knew this salient fact was Jo Bjelke-Petersen and this ignorance ultimately led to the failure of the Jo for PM campaign.
Irish Catholics (with some help from Lutheran Germans) pretty much built Warwick. My father used to relate the story of being horsewhipped at age six by a Protestant cow-cocky because he’d strayed on to his property taking a shortcut home. He was called a “dirty little tyke”. My dad did it pretty tough as a youngster in Warwick. His mum died when he was eight.
So Warwick has a personal significance.
It also has a Diaspora, and they’re all over Queensland.
The Warwick statue pictured, by the way, is not T. J. Ryan. It is another Irish politician who hailed from Warwick - George Byrnes, who was the first Mayor. He was, of course, an Irish Catholic.

As an infantier I am amazed that you have not retained your sense of navigation using the sun. I'm guessin' that it wuz cloudy, so I'll let you off this time. I don't want you giving us dumb grunts a bad name.
Cav
ps
I bought a new Garnmin sat nav on Friday.

Cav
Nothing to retain. My nickname is one eighty because I have a tendency to head in the opposite direction to the correct one.
I can count though - so was given a sheep-counter to count paces for navigation in Vietnam.