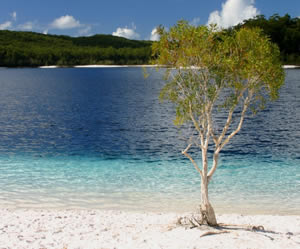 Blue Lake - Fraser Island
There’s been heaps in the media recently about bullying.
Some of the commentary is hysteria mixed up with drivel but it attracts attention. Frankly, bullying is no more or less a problem than it has been for years – people are simply more likely to call it. That’s a good thing.
It also gets filmed and spread all over the interweb. Hence it gets attention.
Years ago (early eighties) I was principal of a special school in the northern suburbs of Brisbane. In those days, primary school principals had the bad habit of trying to offload kids (usually adolescent boys) with behaviour problems on to special schools.
I made myself very unpopular with the district authorities at the time by complaining loud and long about this practice until it was stopped but I’d inherited many of these kids from my predecessor who had rolled over.
The main reason why this was a bad practice was that the kids with intellectual impairments – legitimately enrolled at the special school – were given a hard time by the brighter ant-social kids who shouldn’t have been there in the first place. The combination of aggressive kids and kids lacking protective behaviours was toxic.
I got together with the principal of a neighbouring special school dealing with the same issue and we decided we’d try to do something about it.
We took four of the most intractable kids from each school (total of eight) and with four adults (two principals, and two male PE teachers) equipped with three 4WDs set off for seven days on Fraser Island.
We called it an “adventure camp”.  The real purpose was to take these kids out of their street environment and encourage them to learn to cooperate. Some of them were bright kids – some had police records – some were simply mollycoddled. All they had in common was aggressive and anti-social behaviours.
On the first day, we took them for a 5km run along the beach, in and out of soft sand. I was much fitter back then. By the time this was over, they were all completely exhausted, and all they wanted to do was collapse in a heap.
Unfortunately for them, they had to put up their tents and prepare their dinner. Faced with no physical help from the adults (we gave them plenty of advice) they had no option but to cooperate. The alternative was to spend a cold and hungry night. They squabbled a bit, but in an hour or two tents were up, fires lit and dinner was on.
There are red-bellied black snakes on Fraser, and one turned up just before dusk. Suddenly we were alone – all eight had retreated to the safety of their tents. These were city kids after all. The thought of snakes in the dark was too much.
During the night, they weren’t game to emerge, and there were some very full bladders by sunrise. I remember being asked  “Sir - Can you walk in front of me to chase the snakes so I can come out and a have a piss?” I was mean and refused – the walking in front bit didn’t appeal.
What followed was days of fishing (the Tailor were running), hiking through the beautiful environment, and lots of talk about things which these kids would never share with teachers. The environment made the difference.
I remember one kid who previously had been the bane of his teacher’s life showing me how to gang-hook for Tailor. This kid had done a bit of fishing with his dad (before this same dad had cleared out).
This role-reversal (him teaching me something) did his self-image no end of good. It was great for me, as well, as I caught a couple of Tailor. The lad was as chuffed as I was.
By the time we got back, the relationships – both with us, their teachers, and with each other, had improved out of sight. These kids did change, and the camp made the rest of the school year a different exercise. Their parents kept telling us that they had changed for the better, although I’m not sure whether part of the benefit for them was simply the week’s respite.
The only downside for me was that I was completely buggered. My principal colleague’s wife told me that he had slept for two days when he got back, but he was ten years older than me. I needed one day.
By the way, there was no bullying to speak of for the rest of the school year.
Posted by 1735099 at 08:24

Our school sent everyone in year 11 away for a 2 week bush camp in rotation - about 12-14 per group (I think). Totally out in the middle of nowhere (1400km from home) with one teacher for most of that time. Day one started with a very long trek across the desert (at least it seemed like a long way back then - perhaps a 4-6 hour march?)

Funny how much better we all got on afterwards. We all baked and froze together, ate the same lousy food out of tins, got shredded by spinifex, scared stupid climbing and jumping off cliffs, got drunk on VO port etc etc. Each group was designed to have an equal share of sporty types, pointy heads, loners etc.

If done properly, camps like that are magnificent - a great bonding experience.