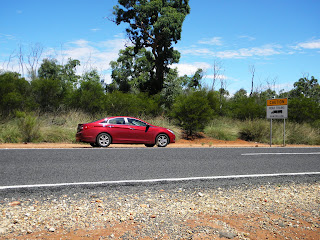 After the sad saga of the clunking Santa Fe, the fleet manager did the impossible and conjured me up a replacement vehicle at short notice.

It was another Hyundai, an i45, obviously intended as a rival for the Toyota Camry.

After driving it over 1500km this week, I reckon this thing is indeed a Camry-killer. It's a better car, in my estimation than the very successful Toyota, and if it doesn't eventually outsell the Camry, that will be a result of prejudice and cliche rather than reality.

It looks a bit ugly, but given the way it drives and the way it seems to be built, I could live with that. The fit and finish is first rate. The dash covering and upholstery is high quality. It has one of the sweetest engine and transmission combinations I've driven, and leaves the Toyota for dead in this area.

If you put your foot down (for example, overtaking a road train), it emits a refined howl, and accelerates at a very healthy rate. This is not at the expense of high fuel consumption, which hovered in the low sevens on the highway, falling to the low nines around town.

There has been some criticism in the motoring press of its steering and handling, but it was at least as responsive and comfortable as the Camry I drove last year on the same roads.

Hyundais suffer somewhat from the reputation of their early products, but they have made enormous progress in the last five years. This particular model deserves to be successful based on value for money and performance.

How was the air con? Every hyundai I have ever driven has been fitted with an air con that just doesn't cut it in an Australian summer.

Boy, I am getting old and soft.

Temperatures were in the mid-thirties where I was last week and the AC was fine. Mind you, the i45 has a fashionably raked windscreen and the air has to be effective to handle the heat generated by the sun when you're driving towards it.

This car is styled on European cars for the Yanks. You can see hints of Mercs and BMWs.

The emerging one to watch is KIA, especially the Koup...

We owned a Kia - a Carnival - once when we had four kids under 15. My eldest son used to call it the "Carnivore".

Despite a bad reputation, it proved reliable, roomy and comfortable, even if it was like driving a block of flats around. My bride hated parking it, but it took us on many expeditions to FNQ.
I got booked for speeding in it (120kph in a 100kph zone) between Ayr and Townsville....