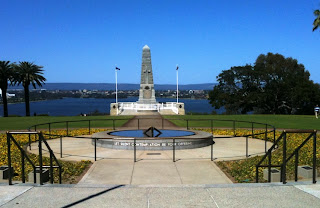 Last Tuesday, as part of our brief sojourn in Perth, amongst other things, we visited King's Gardens. Now I'm not into gardens, but my bride is, and there was no way I could weasel out of this commitment, being part of the incentive I offered her to put up with travelling with me across the Nullarbor on a train.
The gardens were spectacular, as was the amount of information about what was growing there. This information was conveyed by a volunteer guide, a bloke about my vintage, who knew what he was talking about, and was obviously an enthusiast on matters horticultural.
One of the more surprising facts I learned from him, is that large number of the many wildflowers that attract tourists in droves are actually weeds imported originally from South Africa.
As we walked around (quite a few kilometers as is turned out), I kept seeing plaques in front of trees planted to commemorate soldiers killed in wars past. I asked our guide if any of these were dedicated to casualties of the war in Vietnam. He said they were, but we weren't going to pass them on this particular walk. There was, however, a register of names I could check at the Information Centre in the gardens, when our walk was through.
I did this, but the bloke I asked directed me to another volunteer, a woman about my age, who was introduced to me as something of an expert on the Vietnam War.
This connection was much more immediate than I could have predicted.
Five minutes' conversation revealed the following -This garden volunteer was married to a Vietnam Veteran who had served as a platoon commander in my unit. Her brother was my platoon commander from August 1969 until June 1970.
This bloke - a very good man - had died from cancer earlier this year. He lived in Nerang and occasionally I'd driven down from Toowoomba to meet him for a lunch and a talk about old times. He'd been very helpful correcting some factual errors in a manuscript I'm working on.
We spent some time talking about him, and about the amazing coincidence that had brought this conversation about. The odds against it, when considered in the cold light of day, are astronomical.
And then light dawned. Gibbo had set this up. He was up there somewhere laughing at us. 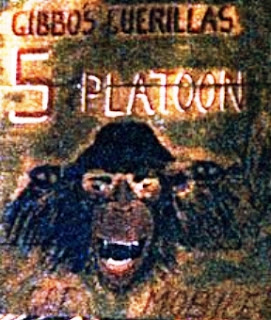 Amazing.
It is indeed a small world.

We always visit Kings Park when in town.