We need to strip bare the language of war

This insightful piece from Kathleen Noonan is well worth a read. 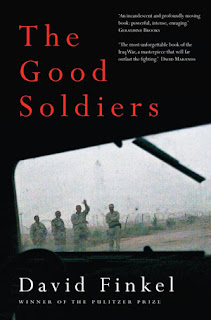 Philip Adam's interview with David Finkel is also something I'd recommend.

Noonan's article also explains where the title "The Hurt Locker" comes from.
Believe it when four men
Step from a taxicab in Mosul
To shower the street in brass
And fire. Open the hurt locker
And see what there is of knives
And teeth. Open the hurt locker and learn
How rough men come hunting for souls.
(Brian Turner 2005)
Posted by 1735099 at 11:05

Some numpty remembers reading it in a poem somewhere, and attributes a term that has been in use for at least as long as I've been in the Army (which significantly pre-dates the comparatively recent battle at Mosul) to where they themselves first heard it? Yep, sounds like the sort of person who could put up with listening to Phillip Adams to me. There is minimal intellectual rigour required, but everyone leaves feeling smug and superior because they've had their pre-conceptions massaged.....and there was a poet.

And you, of course, are entirely free of pre-conceptions and absolutely brimming with intellectual rigour?

It is not an insightful piece by Kathleen Noonan. It is blather. It is a poorly researched collection of cherry picked quotes that offers no real "insight" other than into the fevered machinations of the author. Fail.

As far as Hurt Locker goes, if I had written a poem in 2005 and called it "Nasho", and a movie subsequently came out bearing that title, would I deserve credit for the title?

From the dictionary - Insight: an instance of apprehending the true nature of a thing, esp. through intuitive understanding.

I don’t know how much research she did, but Noonan analyses her view of the true nature of war by selecting quotes from Finkel’s work, for example –

"His soldiers weren't yet calling him the Lost Kauz behind his back, not when this began. The soldiers of his who would be injured were still perfectly healthy, and the soldiers of his who would die were still perfectly alive. A soldier who was a favourite of his, and who was often described as a younger version of him, hadn't yet written of the war in a letter to a friend, 'I've had enough of this bullshit'. Another soldier, one of his best, hadn't yet written in the journal he kept hidden, 'I've lost all hope. I feel the end is near for me, very, very near'.

This obviously doesn’t align with your world view, so you describe it as “blather”.

I call it insightful, because it pretty accurately holds with my experience as a veteran, and as a person who has counseled veterans suffering PTSD. A few weeks ago I was visiting an eighty-five year old woman who lost her son at Long Tan. I went to school with him, and he was a great human being. I remember him defending me when I came in for a bit of stick as a skinny thirteen year old 1600kms away from at boarding school for the first time. He was 19 when he died.

You perhaps should discuss with her the true meaning of the nature of war. She’s never put on a uniform, or fired a shot in anger, but I vouch that she understands the reality better than most.

It’s unfortunate that you apparently lack the capacity to tolerate any perspective which is different from yours. You’re looking at the experience of conflict from a place which is no more or less authentic than mine (or that of this woman who lost her son). Try containing your outrage and you’ll find it doesn’t remove any rationale you may have for wearing a uniform.

After all, isn’t tolerance one aspect of the Australian character that you’d be fighting for?

If you wrote a poem – any poem – you could call it what you liked.

Here’s one I wrote in 1970 during operation Concrete 1. I called it "Locstat"
Each man eases
Pack down, webbing loose
Flares his rationed smoke.
Each man watches
Steel point bamboo stabs
Avoids all other eyes.
Radio hisses
Skipper checks the map
Flicks his compass open
Squints at the scrub
Stink of sweat and fear
Our shared reality
Move now!
The signal curses down the line.
I heave my pack again.

Fine, you say tamayto, I say tomahto. You say it is insightful, I say it is blather. I guess it all does depend on worldview and experience. I would add that when it comes to this particular subject, I submit that I am better placed to formulate an opinion than either yourself or Ms Noonan.

I am quite happy to read and discuss an alternate opinion. I have two very good mates, from very different social circles (both of whom occupy the left of centre politically), with whom I have lively and robust debates on many subjects, including this one. I am also married to an avowed lefty. They are all able to construct a logical and coherent argument, and it is a pleasure to deconstruct these things with them. The article I read was disjointed and contained conclusions not supported by the body of the text. That is why I arrived at the conclusion that it was blather.

I did write a poem. It is here if you’d like to read it.

It is not very good, but I was trying to express some emotions that were running through my head at the time.

If Hollywood comes out with a movie called LOCSTAT, I’ll be sure to give credit where it is due, LOCSTAT not being a particularly common term in military lexicon.