Where was Kilcullen when we needed him? 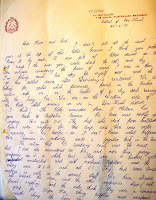 I have kept all the letters I wrote in Vietnam. My mother gave them to me on RTA saying "These might be interesting in the future".
My mum was a very wise woman, and right about most things.

It’s interesting to go through these letters now with modern considerations of counter-insurgency warfare in mind. Thanks mum.
Quite often, I wrote to my parents bemoaning the fact that we were tromping around the jungle looking for “outlaws and delinquents” when we could have been more productively occupied working on civil aid projects in the villages, or at least doing our best to secure those villages, or training the ARVN to do just that.
This may, of course, have been prompted by my dislike of this actual tromping, particularly when it involved carrying the best part of my own body weight in assorted gear, and knowing that the next step might be complicated by an M-16, even though we were luckier than some and in my time operated predominately in the north-west of Phuoc Tuy where mines were rare.

Unfortunately, much of what is written about Vietnam these days elicits more heat than light. It doesn’t seem to be a topic that invites quiet reflection. Instead, writers are stuck on a few memes, including “the war was lost by the politicians”, or “we were winning when we left”, or (the more gung-ho) “we should have nuked them”.

In the light of more recent history, particularly in Iraq, it’s interesting to conjecture what might have been - if some of the thought which changed for the better the way the Coalition was operating had been around in the sixties and applied to Vietnam.

What if a group of dissidents, opposing the conventional strategic thought, had been around in those days? What if the commanders at the time had listened to them?

Where were people like Kilcullen – people who needed to be saying things like body counts were irrelevant, that the war needed to be fought politically as well as militarily, and that we needed to be providing security to allow the locals to assume responsibility, rather than taking that responsibility from them, and blaming them when it wasn’t working?

Instead, we had commanders who not only didn’t fully understand the security environment, but were completely inept at managing the both the politics and the media. Back then the US military wasn’t listening to anyone.

Perhaps one of the few good things that came out of Vietnam was the understanding that modern counter-insurgency warfare is complex and that patience could be a virtue. The “up-the-guts” tendency of the senior US commanders at the time was revealed as the madness that it was, and at last arrogance has taken a back seat to common sense.

We will need to wait for history to deliver a verdict on both Iraq and Afghanistan. The terms “won” or “lost” are irrelevant when applied to insurgency, a point that seems to be well lost on most media and politicians.

Well, the yanks had David Hackworth, and look what happened to him.

I have a sneaking suspicion that many of those currently in senior command positions read "About Face" on the way up, and were influenced by it.

I bought it when it came out in 1990, and took it on an exercise. Someone along the lines of the crusty old veteran RSM walked past and saw me reading it under a shrub. He asked to have a look, and then berated me for reading "that fucking commie turncoat", or words to that effect.

A platoon commander heard the exchange, and borrowed the book later. I got it back after about six months. It had broken in half, because it had been read about 20 times in the interim by all the officers in the regiment.

Years ago I had a meal in Hackworth's restaurant on the Gold Coast. It was great tucker. I didn't find out until much later about his background. He was an amazing guy - a complete one-off.