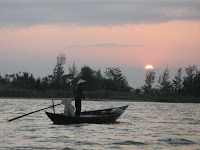 I’ve returned to Vietnam twice in the last three years.

Most of what I saw, heard and felt on these return journeys is probably worth sharing. Apart from anything else, the act of returning lifted a monkey from my back.

Until going back in 2006 I’d always harbored a vague guilt about Vietnam – there were two reasons for this.

One was that I never believed in the "cause" - the notion that we were preventing a Communist takeover of SE Asia which would eventually lead to this heinous ideology gradually descending (through gravity I guess) from the North upon defenseless Australia.

If I'd had the courage of my convictions, I've have failed to report for my medical - and what followed would have been a matter for the courts. All the advice I was getting at the time was that I'd best go along with it, as any criminal conviction would not be a good result in terms of my future career.

I had just started teaching, was successful at the job and enjoying it, and didn't want to put any of this is jeopardy. So I knuckled under - probably the first and last time in my life that I ever participated in something that I didn't believe in.

Another regret that developed during my tour was that I was also pretty typical of my fellow diggers in that I didn't really see the Vietnamese as individuals. Everything I learned since my return in 1970 indicated to me that this was a lost opportunity - not that my posting in an Infantry battalion gave me much opportunity to get to know well these people we were supposed tyo be fighting for.

There is a story going around that if I had made my feelings known to the army, I would have been posted to a unit not “warned” for active service. According to this yarn, in every unit a parade was held prior to embarking for South Vietnam. At this parade, any digger not keen on saving the free world from Communism was asked to step forward. These miscreants would then be reposted to a unit not heading for active service – or so the story goes.

Whether this was the case or not (and establishing the historical fact would be fascinating) I have no recollection of the mythical parade. Paul Ham certainly writes about it in his book, Vietnam - The Australian War. If it had happened, I can’t imagine any other outcome than that of the bulk of the Nashos present taking one step forward. Anyway, it didn’t happen to me.

The other reason is that I’ve always found my experience hard to reconcile was that I’d treated the Vietnamese I’d encountered pretty badly back then. Not that we had much contact with civilians except on R & C in Vung Tau, or occasionally when we encountered unarmed civilians (not VC) on patrol.

I was on a TAOR patrol in March when we came across a group of civvies out collecting wood. They were somewhere they shouldn’t have been, so we rounded them up and shepherded them into a clearing. We then stood over them until the ARVN arrived and took them off somewhere.

One old woman caught my eye. She must have been eighty if she was a day. Despite the fact that I was standing over her and carrying an SLR, she was obviously sorry for me, sweating copiously as I was, and burdened with pack, water and ammunition.

She moved towards me (not threatening because she was diminutive and only came up to my armpit) and mopped my face with a clean rag she was carrying. This amazed me – in the first place that she could feel compassion for someone waving a weapon in her face, and also because she was game enough to make this gesture.

I remember thinking bizarrely about my grandmother and what she would have thought of me if she could see what I was doing.

But back to my return visit.

I travelled back with a bunch of veterans, most of them, like me, ex-infantry. There was no-one from my unit, but there were half a dozen from 8 RAR who were in country the same time as I was back in 1970. My two sons (aged 21 and 23), also came along.

One of the events arranged for us was an encounter with three Vietnamese who had been members of D445 battalion, the same mob that we’d spent months thrashing around the scrub in an attempt (mostly unsuccessful) to eliminate.

We met these blokes outside a war memorial near Ba Ria. Vietnam is a bit like Australia in that there are war memorials everywhere. Generally though, there are a lot more names posted on theirs than ours. They paid dearly for forty years of war.

On the whole, they had aged better than we had. There was plenty of grey hair, but no beer guts evident. They greeted us enthusiastically, with the words – “War is over – we are friends now”. There was much shaking of hands, slapping of backs, and a man-hug or two.

The deal was that we’d be introduced, interpreters would be laid on, and we’d have an outdoor lunch and a Ba-Mi-Ba (beer) or three together. Many of the ex-diggers were carrying laminated army maps marked up as the battlefield had been back in 1970. It didn’t take long for the grog to start flowing, and the war stories soon followed. What was unique about this was that we were sharing stories with our ex-enemy – a strange experience.

During an animated conversation over a map rolled out on a picnic table, one of the Vietnamese blokes started laughing loudly. When we asked, through the interpreter, what was funny, he explained that he was very familiar with a patrol route that was showing on the map. It showed a range of paths used for TAOR patrols – the patrols that moved out a couple of Klics from the Nui Dat base to ensure that we weren’t mortared. The idea was that if the VC knew that they could encounter an Aussie patrol any old time, they’d think twice before setting of a base plate and making a “shoot and scoot” attack on the base. Whilst the routes followed were deliberately random, there were a set of paths followed more or less routinely. 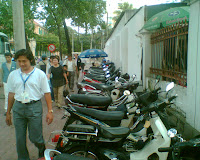 What had caused all the merriment was that the map indicated that patrols regularly passed through an area under which an extensive tunnel system had been set up by the VC. (Later, we were shown the remnants of this system). This ex-VC was laughing as he recalled watching us pass by from the safety of a hidden tunnel opening. When he was asked why he didn’t ambush us, he said – “Too much trouble – we knew you were leaving in the future, and it was better to wait”.

He saw much more humour in it than we did, but I suppose it had its funny side.

For me, it fairly neatly encapsulated the absurdity of the situation that we found ourselves in, back in 1970.

The country is thriving, with a great deal of foreign investment (very carefully controlled by the Vietnamese) creating massive and rapid development. The breed of Communism (called “Doi Moi” – liberal economic reforms introduced in 1986) is far removed from the Marxist dogma promoted by Ho Chi Minh. In fact, I’m sure the old man would be spinning in his grave if he could see what was going down in the name of the People’s Republic at the moment.

Enterprise and entrepreneurship is everywhere, and a lot of people are getting very rich very quickly. The Vietnamese pay lip service to Marxism, but they have, in reality shrugged it off much in the same way as they shrugged off American intervention in the sixties and seventies.

The bulk of the population have no memory of the war, and to them it is irrelevant.

I came home with a weight lifted from my shoulders. I really hadn’t done much harm to the country, and my involvement was a footnote, rendered irrelevant by the energy and optimism of contemporary Vietnam. And there were no hard feelings.