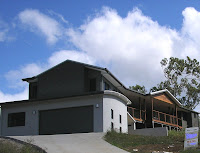 During our wanderings north, we called in on some rellies. As I’m one of six, and my wife one of eleven, there are plenty.

Two of them (a niece and a sister-in-law) have built homes in spectacular environments and clad them in corrugated iron.

My niece’s new house is a gem. It’s built on a hillside with sea views (and the all-important sea breeze) in the Mackay hinterland. There are also views to the west across the Pioneer valley. As the sugar cane season proceeds (called the “Crushing” up here) – the landscape changes daily. The perfume of the valley wafts up the slope when the wind is in the right quarter. In short – a beautiful environment.

The house is environmentally friendly, and is self-sufficient with the exception of electricity. My niece and her husband had intended to install a solar system, but were defeated by the bureaucracy, and the fact that the concept was a little too novel for the local council.

To me, there’s something quintessentially Australian about corrugated iron. It’s tough, durable, flexible, unpretentious and functional. These are understood as characteristics that are part of our national ethos.

It also looks pretty good when used by professionals, and recent refinements to how it’s finished have made sure that it lasts. It’s also lightweight, inexpensive and practical.
As a material, it has also been used by prize-winning architect like Glenn Murcutt. His Marie Short House at Kempsey has made us look differently at this once humdrum building material.
When I was a kid, we used to make canoes with corrugated iron castoffs. You needed tar to plug the ends, and they were buggers of things to cut yourself on, but they were light and easy to make.
Posted by 1735099 at 08:30

I helped some friends demolish an old shearing shed on the property next door to theirs. The neighbours were going to bulldoze it into a hole, and they allowed us to take what we wanted. It was all bush poles and 100 year old galvo.

Unlike the modern sheets of GI, the old sheets were all 5 or 6 feet long and weighed a ton - they were as thick as can be. I could only carry a single sheet on my head at a time, whereas when I've done roofting with modern galvo, I can carry a stack of much longer sheets.

The old stuff was used to roof a new building that had an old look. The weathered look of ancient galvo did the trick, but it was an utter bastard to get it up on top of the rafter. I reckon it was dipped in lead rather than zinc!